Gulaal was not released for three years. I don't know why.

The soundtrack of gulaal is awesome. But it has to be discovered.

I enjoyed the character of Piyush Mishra the most. His poetry, rendition etc. When I was growing up, I read a few select books in every summer vacation. One was Bhagat Singh's biography and the other was Chandrashekhar Azad's. And I always picked Azad over Bhagat.

They had different styles. Bhagat Singh wanted to discuss and tell his views to everybody. He wanted discussion, reasoning and a broader understanding, and he chose a courtroom as his platform, albeit at the cost of his life.

Azad wasn't the type who cared about reasons. ( I am starting to include my bias at precisely this point). He just wanted to do a few things his way. He did them and left. I guess, since there is so less known and heard about his that the same cannot be rehashed again and again.


The movie exposes the concept of Rajputana and how IG with one stroke nationalized inherited wealth and planned to redistribute it equitably among other. I have no idea, how god was that execution. I hope it brought on some good.

But needless to say, an action as swift as this would produce resentment.

Movies can fall into genre, like crime, drama, comedy etc. But I like to classify them on the parameter of their objectives. A non exhaustive list on a variety of objectives can be :
1. Show a mirror to the society or a focus group. Delhi 6
2. Articulate an undercurrent and catch the pulse of people. Rang De Basanti
3.Give people 3 hours of break from their existence. The Yash Johar, Chopra kiln, risqué comedys.
4. etc.

Gulaal tries to capture the pulse and also present a mirror. (Now I am being ambitious here, trying to fist manufacture a classification and then putting a movie on a pedestal saying that it is a hybrid one)

Hell, but why does Anurag Kashyap make women in his movies so strong and practical.
Books update. 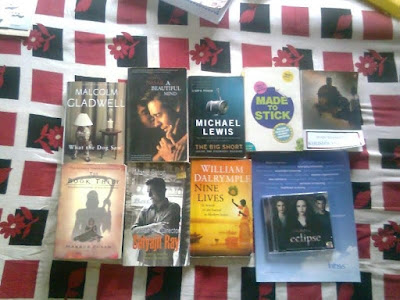 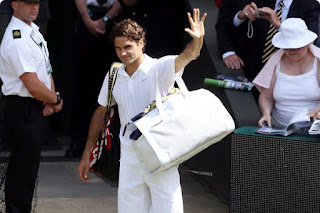 OK. There was a photo in papers which showed him holding his head by both his hands and looking down. Surely the editors of the paper did not think twice but choose that image over thousand others. It was melodramatic and kind of dense in the pseudo intellectual way.

Even in his post match press conference , the video of which can be accessed from Wimbledon's homepage, he said many things. But the copy of the article turned out as Federer blames injuries for his defeat.

In another context, somebody said that, I really like hearing to what the really rich people have to say. As they just don't have to bother about anything but just express their views.

RF is a pretty candid person and when asked a question gives his honest opinion. He also said a beautiful one liner, I made it to the quarterfinals at Wimbledon. People would die to do that. That, unfortunately did not get published.

My problem is I am not rich. Quite contrary actually. But my nature makes me quite candid, as much as I try to suppress my views. It still does. And that is hurting me now. Professionally. At least when looked from this moment backwards.

Another quote, What is the worse that can happen. stay calm.
at 8:38 PM 3 comments: